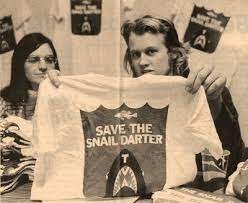 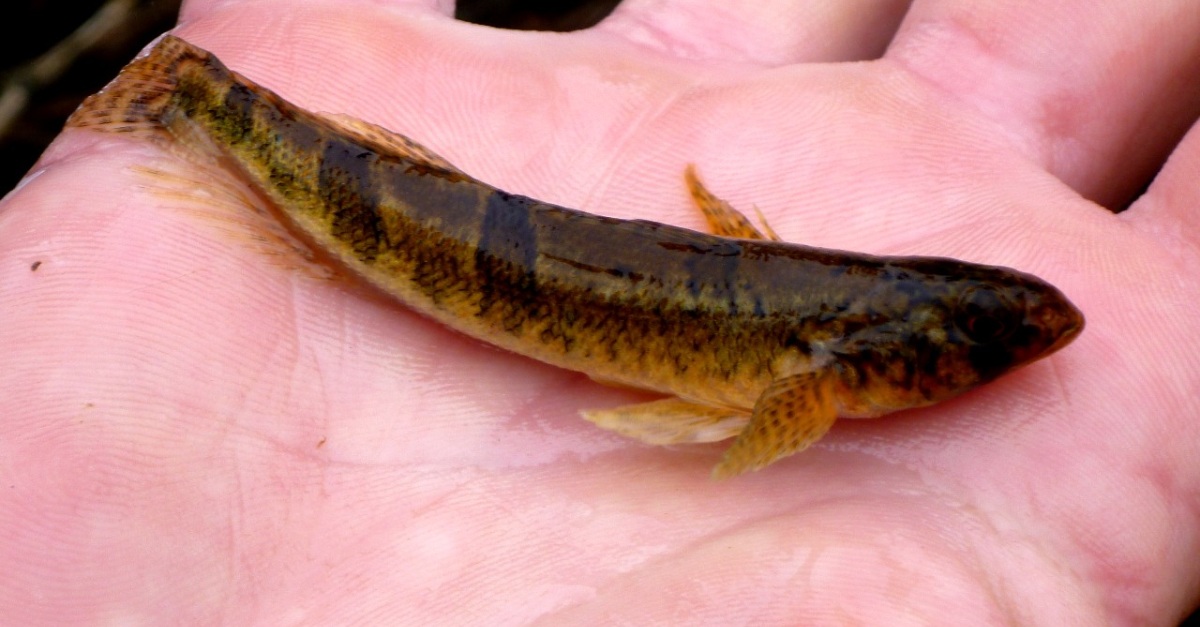 In a recent blog post, we described the recent conclusion by the US Fish and Wildlife Service and others that the Maryland darter (Etheostoma sellare), a small fish that once lived in tributaries of the Susquehanna River north of Baltimore, is now extinct as a result of habitat degradation over decades. Darters are a species-rich group of mostly North American small fish in the Perch family, many of which, like the Maryland darter, have (or had) small ranges in the eastern United States. Among this group of fish, the most famous (and most notorious) species is the snail darter, Percina tanasi. As a teenager in the 1970’s, I vividly recall news stories about how this tiny and poorly known fish was in danger of being wiped from the face of the Earth by the construction of a massive dam in Tennessee. As I recalled the story, the darter was spared when the regulatory power of the brand new US Endangered Species Act of 1973 halted the construction of the dam in the nick of time, despite a great deal of political wrangling in an attempt to end-run the ESA.

Well, as it turns out, almost everything about the snail darter story, as I (and many other conservationists of my era) remembered it, turns out to have been wrong. Several years ago, while teaching a course in Conservation Biology at Brandeis, I got to speak with Zygmund Plater, a professor of environmental law at Boston College Law School, who was at the center of the court battles over the fate of the snail darter in the 1970’s and wrote about it in the book: The Snail Darter and the Dam. The actual story of the snail darter vs. the Tennessee Valley Authority was more complicated.

First surprise: the Tellico Dam, the subject of lawsuits under the Endangered Species Act that made it all the way to the US Supreme Court, was built and is still operational. The dam was finished in 1979, despite a 1978 Supreme Court ruling in favor of the fish and the conclusion, by a specially appointed governmental “God Committee,” that the dam had no compelling economic justification. In the end, Senator Howard Baker (R., Tennessee) was able to pass a bill that specifically exempted the Tellico Dam from the Endangered Species Act provisions. Today, the Tellico Dam on the Little Tennessee River creates an impoundment with 357 miles of shoreline, drowning the previously known habitat of the snail darter.

Second Surprise: The snail darters survived the loss of their known habitat because: 1) it turns out that they actually occurred in some nearby streams within the Tennessee River watershed that were unaffected by the dam, a fact that was not known during the court hearings, and 2) because prior to finishing the dam, biologists successfully relocated many of the Little Tennessee River snail darters to Hiwassee River in southeastern Tennessee.

Best Surprise: The reintroduced populations of snail darters thrived, with a great deal of conservation management. They have even been able to successfully repopulate the Tellico Dam reservoir as the result of management actions by the Tennessee Valley Authority, the proponents and managers of the dam, in which the TVA “adds liquid oxygen to the water at times and pulses dams to get silt off the gravel where the snail darters spawn.” (source: NPR story, see link below). The recovery of the snail darter allowed USFWS to downgrade the snail darter from Endangered to Threatened in 1984. More recently, with continued recovery, Zygmund Plater, the “Atticus Finch” who fought for the survival of the snail darter, joined other conservationists to petition the USFWS to remove the snail darter from protection under the ESA since it had recovered adequately. On October 4 of this year, USFWS agreed to delist the snail darter and thus acknowledge its recovery.

It is interesting to reflect on why the Maryland darter went extinct despite its listing under the ESA while the snail darter recovered and is no longer threatened with extinction. I would suggest that one of the major factors was simply the relative levels of attention given to the two species. Almost no one was paying attention to the fate of the Maryland darter, which was almost certainly nearly extinct at the time that it was listed under the ESA in 1973. Because of the Tellico Dam controversy, however, LOTS of attention was focused on the snail darter. In most cases, we humans can indeed prevent the extinction and very often foster the recovery of endangered species, even ones that are close to the brink of disappearance, if we pay attention and take sufficient action.

As it turns out, there is another small darter, the swamp darter (Etheostoma fusiforme), that lives in Massachusetts and, unlike the snail and Maryland darters, has a broad range along the Atlantic and Gulf of Mexico coastal plains in the United States. Although its wide range keeps the swamp darter from being globally endangered, it appears to be declining rapidly in the northeastern United States, where the species is now regarded as a priority species of “Regional Conservation Need”. Our ZNE Field Conservation Department occasionally encounters swamp darters while searching for another small, rare fish species, the bridle shiner (Notropis bifrenatus), in small streams and stream-connected weedy ponds in eastern Massachusetts. Hopefully, we can all be mindful of the stories of the snail and Maryland darters and pay sufficient attention to local swamp darter populations, intervening on their behalf as needed, to keep the Massachusetts swamp darter populations well clear of state and federal endangered species lists.